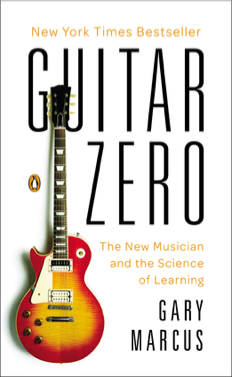 At 40 years of age, Gary Marcus had no music training and no apparent musical talents, but he loved music. With the excuse of testing the learning capacity of adults, he decided to commit to really giving music a try for the first time. In his 2012 book Guitar Zero, he tells of his experience. More significantly, he somehow managed to condense a vast overview of diverse research in music psychology and the psychology of learning into a fun read for all audiences.

If you assume this to be an instructional book, you will be overwhelmed. To follow the path of Professor Marcus, first become a tenured faculty at a well-funded institution; then get a paid sabbatical. As Marcus clarifies, the lack of dedicated time is the primary obstacle for most adult attempts at learning new skills. So, now that you have time, funding, and professional connections to call on, the next steps are simple: Make arrangements to meet some of the most famous living musicians; go take lessons with several of the very best teachers; and get the top experts in music psychology and theory to personally answer your questions and advise you on what research to read. With these simple steps, you too can become an adequate amateur musician!

Of course, Marcus is not suggesting that others could follow in his steps exactly. Instead, this book is more about the science of music and the science of learning, as told through a quirky personal story. Simply put, there's been no way to test theories about adult learning versus child learning. Children regularly put in persistent commitment over many thousands of hours; and researchers can't find adult beginners able to do the same. So Marcus decided to be subject number one.

As Marcus discovers and presents convincingly, there are many reasons to doubt the popular idea that success is purely a matter of hard work and persistence. While hard work is a requirement for success, it is not a guarantee. Besides having the right supportive circumstances, there are a range of hereditary strengths and weaknesses that greatly influence our outcome. Talents run in families, even when controlling for learning environments. Some people simply pick up some skills much more easily than others.

On the other hand, Daniel Levitin, author of This Is Your Brain On Music (2006), was surely overly harsh when he diagnosed Marcus with congenital arrhythmia. Marcus may not be gifted in rhythm, but with the help of better teachers and lots of work, he eventually developed a legitimate feel for rhythm. Being a little slower at learning something does not make it unlearnable. Furthermore, evidence for so-called "windows of opportunity" is scant. There are certainly differences in child-learning and adult-learning (and Marcus describes these in depth), but it may well be that the vast majority of skills remain learnable throughout our lives.

The main shortcoming of Guitar Zero is in its contemporary Western cultural assumptions. The seemingly basic ideas of harmony, meter, scale, even song are far from universal. In the past, I've been criticized for complaining about this ethnocentrism in other books. Most people point out how obvious it is that this is about Western pop/rock music (with jazz and classical music acknowledged too). Perhaps it isn't fair to nit-pick. Clearly the vast majority of all the people Marcus came in contact with, from music scholars to guitar teachers to performers, all share this general Western definition of music, as will most readers. Beyond that, some effort was indeed made to clarify cultural context, just not to the extent of actually talking to knowledgeable ethnomusicologists or otherwise really questioning the Western assumptions. At its best, Guitar Zero can be viewed as exactly what it claims to be: a documentation of an American casual listener and scientist delving into learning electric guitar, with all the inevitable assumptions and issues that entails.

When Marcus first picks up a beginning guitar book, it is inevitably one of the countless generic methods that teaches the canon of beginning guitar stuff. Of course, that means it assumes standard tuning, goes into all the jargon of the Western musical alphabet, chord names, and bunches of arbitrary chord shapes to memorize. And despite Marcus' expertise in developmental psychology, he never seems to question the methodology. Instead, he defers fully to this random book. Marcus even carries this into Guitar Zero, writing (wrongly) that the "aspiring guitarist has to memorize [the full fretboard chart with names]." Marcus describes one of the most challenging versions of an F major chord as "the simplest version of the F major chord" (presumably because the book said so). After struggling with generic ear-training software (the typical sort that teaches tempered intervals at random completely out of context), Marcus declares that learning music (and guitar in particular) is just inherently super-difficult.

Most baffling is that Marcus later learns about alternate guitar tunings, different learning approaches, and more, but he didn't revise the earlier sections of his book. He could have described his struggles without suggesting that they were inevitable. The real lesson ought not to be that the guitar is unusually complex, challenging, and bewildering. The real lesson is that generic guitar pedagogy is lousy. Unfortunately, it seems Marcus fell into the common trap of feeling positive and nostalgic about his first book, perhaps because it was a challenge he overcame… Now, readers of Guitar Zero will be going out and buying more copies of the same mediocre method book, only to face the same lousy struggles but without Marcus' funding, time, and great teachers to go to later for help. The message to readers should have been to skip this generic guitar method approach and find a better way to start.

Leaving behind the (lousy) guitar method book, Marcus looked up some teachers, and from this point on, Guitar Zero is a marvelous book. Several different teaching approaches are described, such as a wonderful Suzuki guitar teacher with deep enthusiasm for her students, engaging teaching concepts, and wonderful pacing. This is followed with a superb and brief critique of the Suzuki method's rigid repertoire, unhealthy perfectionism, and lack of creativity. Quick mention is made of several other music teaching approaches: Dalcroze Eurythmics, Edwin Gordon, and others (acknowledging Orff and Kodaly but without time to discuss them). The conclusion is that many of these are great, but the quality of the individual teacher is the most important factor.

While Marcus' journey as a guitarist and musician is interesting, what I find truly remarkable is how well he synthesized a well-rounded understanding of music research in such a short time. This book provides a better and more accessible summary of the general concepts of music than most works by life-long music scholars and teachers.

Guitar Zero has a bit to say about all these subjects: music evolution, music and language, beat perception, melodic perception, harmony and tuning, expectation in music, musical genres, music and memory, music and emotion, music in social context, statistical learning, the balance between novelty and predictability, attention, personality, self-actualization, creativity, music technology, and more. All of this is surprisingly up-to-date and accurate while still succinct. Of course, having already read much of the academic literature myself, I can't be sure how meaningful the little tidbits here will be for general readers. It is clear, at least, that Marcus did his homework and really understands the latest perspectives on the science.

In the end, Marcus agrees with Steven Pinker's infamous statement that music is "auditory cheesecake." In other words, music is a superstimulus — a cultural invention which somehow triggers a whole interactive series of brain responses that we enjoy. There is no music center in the brain. Instead, cognitive capacities which exist for other purposes are utilized in music. I would like to qualify this by stretching the definition a little, however. We may not be designed specifically for cheesecake, but we are designed to desire food. Likewise, music in the definition that Marcus sees it (chords, melodies, pop songs, etc.) is surely an auditory dessert; but entraining socially to a rhythmic beat, for example, is more fundamental. Responding to the emotional expression of prosody in the human voice is also part of our basic nature. Put just these musical bits together, and we have something (an emotional dance-chant sort of thing?) which many people would call music, even if it lacks all the qualities of modern music. Overall, Marcus (and Pinker) are correct, though. Music in the modern sense is a cross-modal cultural phenomenon, restricted by and deeply connected to our basic biology but not inherent to it.

Disregarding a few other nit-picky complaints, I was awed and humbled by this marvelous work. There is no more accessible introduction to these subjects that I've seen. Guitar Zero is fun, informative, and inspiring. I was especially pleased to see certain ideas which I promote myself in my teaching: the analogy of tempered tuning to impressionist painting, emphasis on the enjoyment of improvisation, rejection of the idea that generational music preferences are about rebellion (today, lots of younger people love the music from their parents' time), and even mention of the phenomenal recordings by Dave Soldier of the survey-based "most wanted" and "least wanted" music (check it out, it's hilarious).

Furthermore, I agree with the final conclusion, which I'll emphasize even stronger in my own words: Music technology is already remarkable and may even one day achieve adequate synthetic expressiveness and variation so that computer-generated music is as enjoyable to listen to as music recorded by people. The lesson of Guitar Zero is that the real meaning of music comes from participating in it. The process, both personal and social, of playing music is more valuable than simply listening to the end result. Gary Marcus will never be a renowned professional musician, but I expect he would do this all over even without a book deal or the funding support, just because he now knows that engaging in music is a deeply fulfilling pastime.

For those, like myself and like Gary Marcus, who don't want to just go through the motions but want to study scientifically how it all works, I highly recommend Guitar Zero. It is fun and personal enough to really engage people who might not otherwise tread into the science, and it is scientific enough to satisfy the most scrupulous academics. That said, it is just a fun cursory overview. If you really want to learn about the science, check out Marcus' thorough references section.

[note: it's a relatively quick read, so I recommend that you do as I did and support your community by borrowing the book from your local public library. If you want to buy it though, the link at the top of this article goes right to Amazon.com]